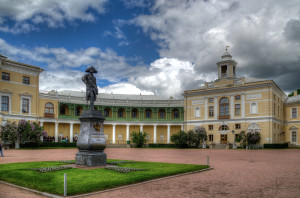 It is a piety that not all guests of St. Petersburg visit this place though it is really special and uniquely preserved, original palace of the end of the 18th century. Pavlovsk Palace was designed for the family of Emperor Paul I (son of Catherine the Great) and his wife Maria. It is located in one of the suburbs of St. Petersburg and had quite a “lucky” fate in the World War II (compare to other suburban palaces) because it was almost completely preserved. Paul spent only 6 years on the Russian throne and then he was assassinated because the aristocracy did not understand his course and decided to get rid of him. He is usually called “the most mysterious emperor” or “a knight on the throne” and his personality is still a mystery. He was an outstanding intellect and could speak 9 foreign languages, and after the visit to Pavlovsk Palace you will definitely agree that besides that Paul and Maria had a perfect art taste because compare to other royal palaces Pavlovsk seems the most “livable”, you really feel yourself guests of Paul and Maria! During the tourists’ season a visit to Pavlovsk may be a nice rest from crowds and noise because it is almost always quiet and peaceful.